Ignoring the COVID-19 world we live in right now, going out to eat is something we all love and while we don’t mind tipping the wait staff, we often don’t understand the tip calculation. Hence, I thought that helping you make a tip calculator would be the best way to get you started on making your first iOS app. Don’t worry if you haven’t built anything in iOS prior to this, with the right instructions, it’s not hard. If I can do it, so can you. The rest of this article is structured as follows,

You will build a simple tip calculator where the user can enter their bill amount and push a button to calculate their tip. They can enter the tip percentage and edit the amount of tip they want to pay and before anything, let’s get familiar with our Xcode environment.

Download the starter project attached and open the Tipcalculator.xcodeproj and run the project and you can expect to see an empty shell of an app that doesn’t do much. That’s ok, you will add all the functionality as you read through this tutorial. Open Main.storyboard file and you will see the following 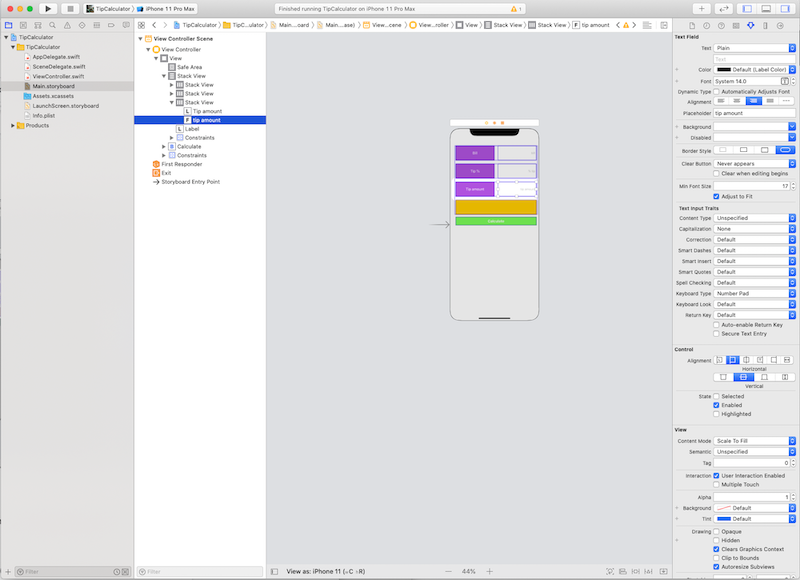 You can see our UIElements as being UITextField (s), UILabel (s) and UIButton to calculate the amount. UITexField, what? Ok, think of it this way

For this tutorial, everything is arranged for you so you don’t have to worry about positioning elements (auto-layout). If you are feeling overwhelmed in this new environment, don’t worry you will know more once we discuss some iOS concepts.

Open Main.storyboard and you will find yourself in the interface builder (IB – try to remember, you will see ‘IB’ later), and what you are looking at is the Graphical User Interface (GUI or just UI) for our app. Interface builder is part of Xcode and it’s there for you to build the UI for your app. You can drag and drop GUI elements such as UITextField, UILabel, UITableView etc and position them in our app using auto-layout.

Storyboard is just one of the many ways in which you can build your iOS app UI, there are other more advanced techniques that you can learn once you are more familiar with Xcode.

This entire process can be summed up as, you are an artist, Swift is your favourite paintbrush, Storyboard is the canvas and your app (tip calculator) is your masterpiece.

Connect the storyboard to code

To connect your storyboard elements to code, let’s bring up the assistant editor

You will see the assistant editor on the right of the screen.

The Assistant Editor opens the code for UIViewController (back-end) where you can control aspects of your app by writing Swift code. Now let’s start connecting our front-end to back-end 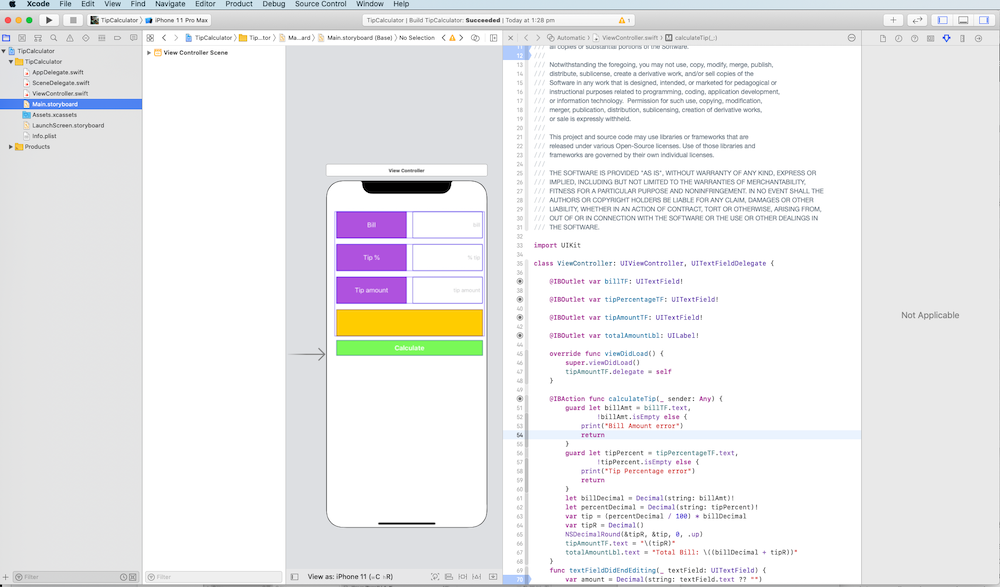 You can name the resulting IBOutlet whatever you want but for this tutorial let’s name it “billTF” as seen in the screen below.

p.s. TF = TextField, just something I normally do to remember the type of variable it is.

Lastly, ctrl-drag from the calculate button and name it calculateTip 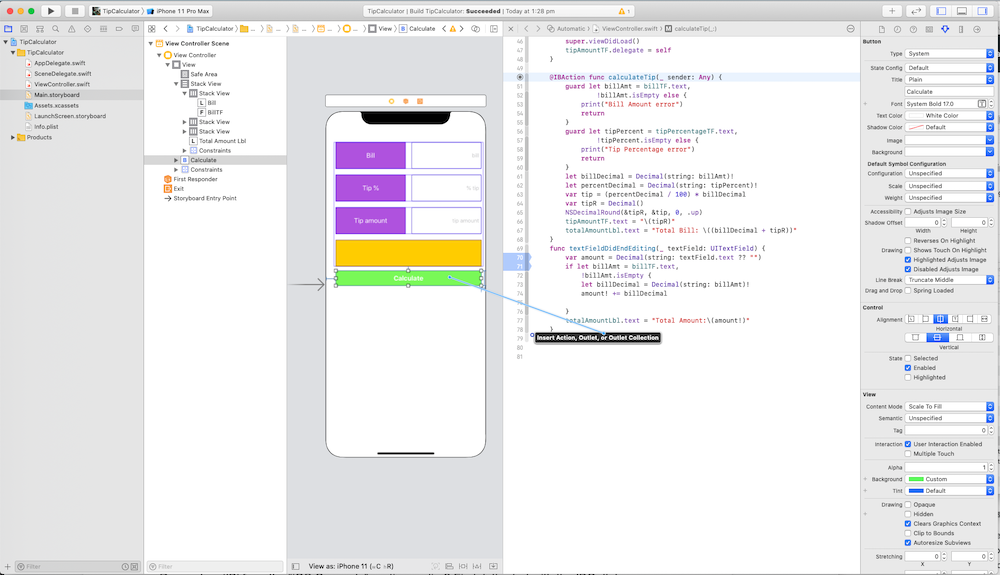 Notice, this is a bit different in that, it’s an IBAction and not an IBOutlet. Wait, IB…what?

An IBAction is a function that has a return type void. Here it triggered it on your .touchUpInside event. It’s a way in which you tellInterface Builder that when the user taps the button, call this method in the ViewController.

In summary, what you are creating here are Interface Builder (IB) outlets and Actions. Setting up and configuring outlets is a way to establish communication between your GUI and code i.e. between front-end and backend.

I think it’s time to write some Swift code now, hmm, let’s do one more thing before that,

Since you  are building your first iOS app, I am keeping it simple and setting the Keyboard Type to Number Pad, it ensures you always get a numeric value from the user.

You are using Guard to check

If it doesn’t meet the above conditions you print an error message to the console and transfer execution out of the program.

Ok now that you have the bill amount and tip percentage, you can calculate the tip amount and the total bill. Below the above code in the calculateTip method, write the following code,

Here’s what happens in the above code

p.s. I realise the user may end up paying more due to rounding up tip amount, but come on you have to feel for the wait staff, they work very hard and these people have lost a lot in the COVID-19 crisis.

guard statements were introduced in Swift 2.0 with one of it’s goals being, making Swift code easier to read. Swift has optionals and you can often get caught in a series of  “if let” statements which you can call the “pyramid of doom”. The above code without guard would be something like,

That’s a very small example, the indentation can continue increasing, get messy and resemble the “pyramid of doom”.

Press cmd+r on the keyboard and run your app in the simulator and marvel at your creation. You just made an iOS app, you’re awesome.

In this tutorial you made a very simple yet, fully functional iOS app and you got familiar with the Xcode environment, wrote some calculation logic in Swift and learned some iOS concepts. This was a very simple example and I encourage you to continue on your iOS journey, starting with improving the tip calculator you just wrote.

Where to go from here?

You can download the final project from here and from here on, you can do a number of things,

As usual, if you find any of my posts useful support me by  buying or even trying one of my apps on the App Store.

Also, if you can leave a review on the App Store or Google Play Store, that would help too. 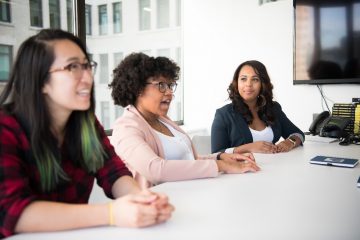 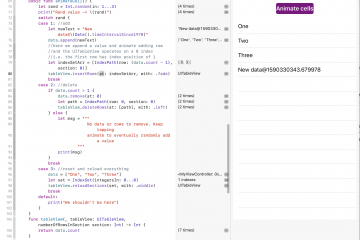 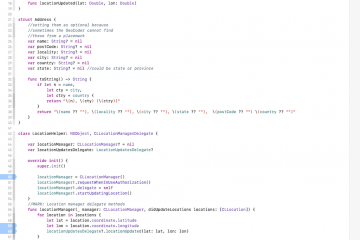 How to build an iOS App with no Storyboard