I have already written about how fastlane can make uploading screenshots to iTunesConnect easier and in this post and in this post I will talk about another one of it’s very useful tools i.e. frameit. If you look at App Store screenshots for my iOS app My Day To-Do, you will see that they look great with a nice device frame around them, something which I achieved using the frameit gem from fastlane. The documentation on frameit as of now doesn’t talk about everything and learning how to use it takes a bit of effort which is fair enough I suppose. I mean they gave us a great tool so it is only fair that we contribute to it somehow so in this post, I will talk about what I learned while using frameit to frame my App Store screenshots. There were some rules I had to follow to successfully use frameit for my iOS app and here I will share what I learned so it saves the next person learning to use it some time. Ohh and in my quest to save the next person some time, I have also created this pull request for the fastlane examples repo.

Initially I thought that simply annotating App Store screenshots with some text via speech bubbles using the Mac Preview tool should be enough to attract prospective users attention. I did come across the fastlane frameit tool but I just ignored it and thought “nahh surely it can’t make the screenshots look that good!” until a couple of months later when someone told me that framed screenshots result in better downloads. So I decided to have a look at fastlane and when I saw what a framed screenshot, I just thought “WOAH!!! they do look better” have a look at the screenshots to see the difference for yourself
So looking at it, while my original screenshots with annotations certainly gets the message across the framed screenshot just look a little bit better in comparison, I think.

Must know info on using frameit

The frameit docs do cover everything there is to know about using frameit but there were just a couple of little things that I had to learn by trial and error. Also when I was learning how to use it, I really wished I had a full working sample of a project with the images. The MindNode example has all the necessary files except the actual screenshots and it also doesn’t provide any details into some of the rules that you must follow to get frameit working. So without further a due, let’s start on it.
p.s. I won’t be talking about some of the basics already available in frameit docs or things like where to store your device frames for which frameit does a great job of telling you where to download from and store your device frames.

Here’s a screenshot of the setup for my app 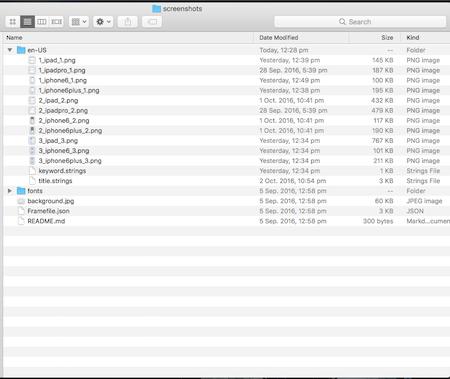 I have a folder titled screenshots in the folder for my app My Day To-Do, in which I have my Framefile.json, background.jpg, followed by my localisation folder. Right now I only my en-US localisation which has the screenshots and my keyword.strings and title.strings.

One of the things that you should know about Framefile.json is that make sure you don’t leave any trailing commas or anything in your JSON structure. e.g. the code below will work
“default”: {

},
You will just get the error that maybe something like this,
Invalid JSON file at path ‘./myDayTodos/screenshots/Framefile.json’. Make sure it’s a valid JSON file
I must confess that I am guilty of leaving trailing commas in some of the Javascript code I have written, so I thought I could just leave it here and it will be just fine.
Even though the data part of the JSON file is self explanatory, I did not find it so obvious while working with it initially.
Now the format of the code above is
filter: imagename
So 1_iphone6_1 is the name of my image file for the screenshot and for the keyword we specify a colour of the keyword found in the keyword.string file.
Again even in this structure you cannot have a trailing comma e.g. no trailing comma after the filter object for 2_iphone6_2.

Ok so it’s best we look this with a sample. 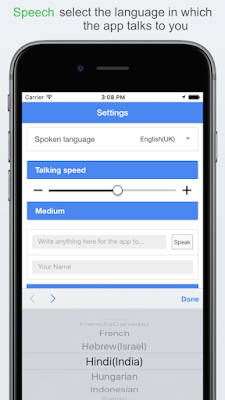 Have a look at the screenshot on the right, the text in that screenshot comes from the following
keyword.strings
“3_iphone6_3” = “Speech”;
title.strings
“3_iphone6_3” = “select the language in whichnthe app talks to you”;
As noted above 3_iphone6_3 is the name of the image file on disk and if you remember we defined a colour for our keyword in our framefile.json
So how does this work? have a folder for your localisation, save your screenshots there, use the name of the screenshot and specify both a title and a keyword for that screenshot.

Lastly, it should be no surprise that frameit will work as expected when being applied to images inside a fastlane project.

Wait what am I talking about?

Once I installed frameit on my mac, I realised that I could run the frameit command from anywhere on my mac so, 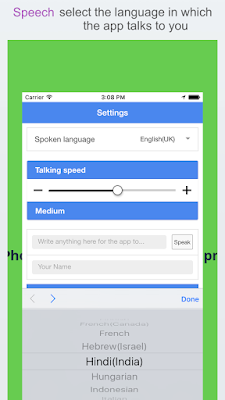 And guess what? It doesn’t quite work as you would expect it to. Have a look at the screenshot on the right that you can see what the end product looks like (it’s missing the device frames).

Despite the initial learning curve(at least in my case), I reckon it’s absolutely worth learning how to use frameit and use it to frame your app screenshots for the App Store. So give it a try and use it to frame your screenshots for your next app update. This is my pull request to add My Day To-Do example to the faslane examples and I hope that it gets merged with the main repo.
Finally, I am working on my app full-time right now so if you find my blog posts useful and want to support me you can
Any feedback on my apps or the way I write my post, would be great.
Categories: app storefastlaneframeitiOSiosappitunes connect