China is one of the most important markets in the world and one of my goals with My Day To-Do is to generate an active user-base in China. Lately I have doubled my my efforts to expand further into that market, that lead to this month when I have seen a significant and “believable” spike in downloads from China. In this post I will be talking about some of the things that I did, am doing and will be doing to keep the momentum. This post is on how I generated 10,000 downloads for my app for my startup by marketing to Chinese consumers using Chinese social media, Weibo, WeChat etc.

How did China become an important market for me, was it always the case? When I did a sale on My Day To-Do last Christmas, as mentioned in this post, China was the region with the highest number of downloads during that sale period. Ever since that, I have been thinking of ways of further expanding into that market. p.s. I reckon it may just be that the market is not as saturated as the western market.

I began my journey in marketing to Chinese consumers by posts on Weibo. I knew Weibo was the Chinese equivalent of Twitter, but I had no idea how to post anything on it. I mean I didn’t understand the language at the time, hence I asked someone I know from China to post about My Day To-Do on Weibo. After her post, I noticed a spike in downloads for My Day To-Do Lite. This was her post 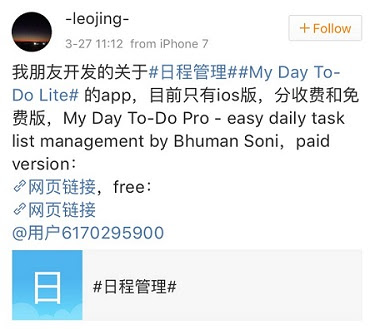 Hmm actually I am not sure if it was her Weibo post or the Bing Ads campaign for My Day To-Do that I had running at the time? On observing that, I felt that it would help if I could post on Weibo myself. This lead to me enrolling in a Chinese language class. It made sense, as eventually I would get to point where I would know enough Chinese to communicate with my users in China.

One of the stages of my marketing to Chinese consumers journey was to learn Mandarin. I have been learning Mandarin and Simplified Chinese (written text) for the last 19 weeks and it’s great fun. It’s very different from all the languages I know, it’s a challenge and I am have a great time learning it at UNSW.  The class goes on for two hours and its is once a week, so that means I need to practice on my own. Fortunately I live in a part of Sydney where I am surrounded by Chinese people and I literally just talk to any random person. I start by asking them, “Do you speak Mandarin?” if they say yes, then I move on to asking them a question and then have them reply to me in Mandarin and see if I can understand it? I once asked two random blokes shopping at a supermarket as to how do I ask someone “have you had a good day?” they were kind enough to help me and they were actually very happy when I repeated 你今天过得很好吗? The Pinyin for that would be “ni jintian guo de hen hao ma?” From what I could tell those two were happy with the way I was pronouncing that sentence. Actually this doesn’t surprise me, I know for a fact that Chinese people like to help, I experienced that during my visit to China in 2012.

I had published my first research paper for my post-graduate research and the conference was in China. I was sent there to present my paper by my university. In China, I would often get lost trying to find my way and end up asking people on the streets or train station for direction. They all wanted to help, just that most of them couldn’t speak English. However, their desire to help was obvious from their body language. That trip, I managed to survice on my own by adapting and learning how to effectively use gestures for communication. I had a great great time!!!!! I was only there for a week but I could travel on my own via public transport, find vegetarian food and be independent. Ok, enough about the awesome Chinese people and my fun trip, let’s ask the important question

Does learning Mandarin contribute to My Day To-Do?

At this stage, I am at a point where I know enough to make a list in Chinese and perhaps create a screenshot for the Chinese app store localisation. E.g. 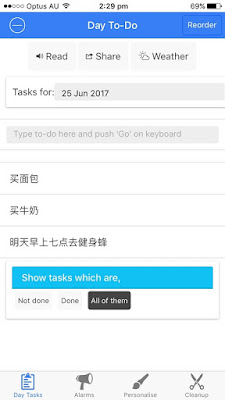 The items in the list are literally
As far as my startup is concerned I knew that it would take me some time before I know enough Chinese beyond making a simple list. Hence, when I was looking for a marketing intern to work on My Day To-Do the ability to speak and use Chinese social media was essential.

Marketing intern at My Day To-Do

Ohh the third stage in my marketing to Chinese consumers journey was to hire a marketing intern from China. In April this year, I had a marketing intern come on-board to help me with the marketing of My Day To-Do. For the first time in more than a year it was not just me working on My Day To-Do and what’s better? he is from China!I had laid out a project plan for my intern such that he gains just as much if not more than me from his internship at My Day To-Do. Also I did want to utilise his knowledge of his home country to My Day To-Do’s advantage. Hence we did the following to promote My Day To-Do in China,

Prior to my intern coming on-board I had localised  all the keywords for different App Store localisations using Google Translate. So the first thing I had my intern do was to come up with the right App Store keywords, which he did. Ohh and the full name of the app on the app store also comes under the ASO category, so I asked him to come up with something better than what I had. Initially for the both versions, the Chinese name I had was something like 我的 To-Do – which is quite wrong apparently but hey that’s what Google Translate told me. So he came up with a better name and we released an update with improved localisation.

Ohh and what more? well, My Day To-Do’s app store screenshots have a nice device frame around them and each of them have labels that define them. Now prior to my intern’s arrival, even the Chinese screenshots were labelled in English which are now localised and this is what they look like,p.s. how do I label the screenshots? read my post on how to label app store screenshots.

Given my positive experience on Weibo in the past, I asked my intern to do the same and below are the screenshots of some of our Weibo posts 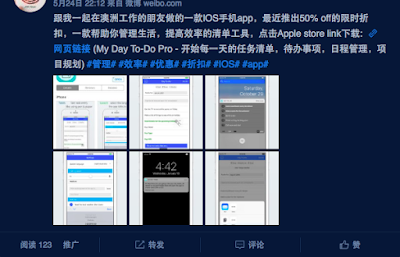 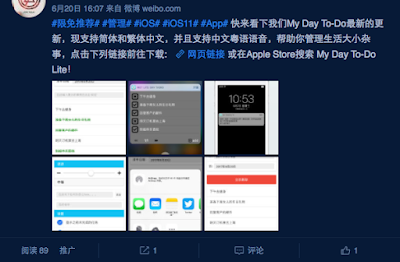 Localisation and the Weibo posts combined or not sure what? but after all this we saw a significant spike in downloads (from China: 1000+) on which I changed his work priorities. Initially, I wanted him to work on creating paid advertising campaigns on Baidu etc next. However after the spike in downloads, I asked him to work on getting feedback from our users. I mean we haven’t gotten any app store reviews nor have we heard anything from our users in China. It’s important to know how our users are using the app and what can we do to make the experience better for them. I mean there’s no point in adding a bunch of “cool” new features and write ‘awesome code’ when it really doesn’t do anything for the users.

Localising the app was always lower in priority when compared to other items on the list of ‘todos’ for My Day To-Do but with the download spike from China, it just moved up in priorities. Here are some screenshots for what the app looks like when localised to simplified and traditional Chinese. 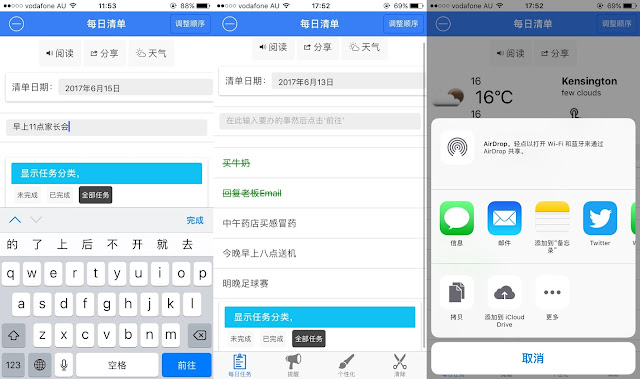 I was so happy when I first saw a localised version of My Day To-Do, I mean I always wanted to localise it and now when I finally saw it happen!!! A big thanks to my marketing intern at My Day To-Do for making it all possible, none of this would have been possible without his hard work.

In the west or the end of the world where I am, we have app review sites or blogs that people read which post reviews for the App Store. I asked him to find something similar for China, but his suggestion was we best try to get it by posting on some of the popular forums in China. We did that and made the following posts,

At this stage we are just waiting to collect all the results of the survey after which we can start analysing all the data that we have gathered.

My initial objective was to boost downloads for the app  now that it’s happening the immediate priority is to know our users better. I cannot stress enough, of how much a priority it is to find out just how people are using the app and that is one of the things I have asked my intern to work on. Also, we have managed to boost downloads but the app is still not generating enough revenue for me to expand.

That’s all for now. I have outlined everything that I have done so far my approach for marketing to Chinese consumers. I am not sure exactly what worked? but something clearly has, hence the download spike so now the priority is to find out what people are doing with the app. As usual, if you find any of my posts useful support me by  buying or even trying one of my apps on the App Store.  https://mydaytodo.com/apps/ Also, if you can leave a review on the App Store or Google Play Store, that would help too.
Categories: Chinese market

Buy Me A Coffee

In November 2017, I wanted to boost downloads of the Pro version of My Day To-Do, so I ran an experiment by running app install ads on Facebook. It was at this time that I Read more…

A few months ago something new happened at my startup, I got the first ever person to work for My Day To-Do i.e. I found a marketing intern. Interestingly enough as it turned out it Read more…