In my previous post, I talked about how I tried marketing my app by boosting a post on my app’s Facebook page. I wrote about some of my early analysis that and much more, if you want to know more about my previous post, you can read it here. I concluded my previous post by talking about the next step in my marketing efforts which was to promote the Facebook page for My Day To-Do. I ran two ad campaigns to promote my FB page which I will discuss here. I will talk about in detail about the first ad campaign I ran for the page promotion, the number of likes I got as a result of it and whether or not I think I got any downloads as a result of it? I will also share my thoughts on what I think of this sort marketing approach and is worth it for someone who’s selling an iOS app.

Following on from my previous post and given just how easy it was to get a marketing campaign going, I thought let me give this another try and perhaps refine my approach for better results. By results I mean, have it generate more revenue or downloads for my app and since I have had a Facebook page my app ever since it’s release, I thought why not promote it. I was aware that Facebook is not used in China, or it’s blocked or whatever, the point is I knew I could not reach my app’s Chinese users via a Facebook ad campaign.

The purpose of this ad campaign was simply to get a feel for Page promotion and reach everyone except those in China. So in the interested of getting the ad campaign going quickly, I set it up by selecting 10 countries, and targeted both men and women of all ages. Here’s a breakdown of the details
Countries: Argentina, Australia, Brazil, China, Spain, United Kingdom: England, India, Japan, Kenya, South Korea, Peru, Sweden, Taiwan, United States or South Africa
Ages: 13-60
Interests: IPhone, Mobile phones, IPad, App Store (iOS), Speech synthesis, Smartphones, IOS, IPhone 4S, The To Do List, IPad Mini, IPad (4th generation) or IPad Air
Budget: Max $10 a day
In summary my ad for the page promotion should reach everyone between the age of 13 – 60 who have the interests listed above and who live in the countries listed above.
If anyone were to ask me why did I choose those 10 countries, the answer is no particular reason. Really I just looked at the map and selected the countries one by one. Yes I was going through the map and selecting countries one by one, I could not find anything in the Facebook ad UI that would just let me select “All countries”, so I kept selecting countries till I got tired of it.

Below are some screenshots of my ad campaign results,

As you can see Facebook provides a good summary via it’s ads UI for the page promotion results, so in order to save you some effort let me list down some numbers,

Over the 6 day period, My Day To-Do FB page got 1838 likes which meant that over 28% of the people this ad reached ended up liking the page.  It’s very clear that the majority of the audience for the ad campaign were males or to be more precise teenagers between 13-17. I mean 40% of the audience reached in that age group liked the page. This raised the following questions to me, 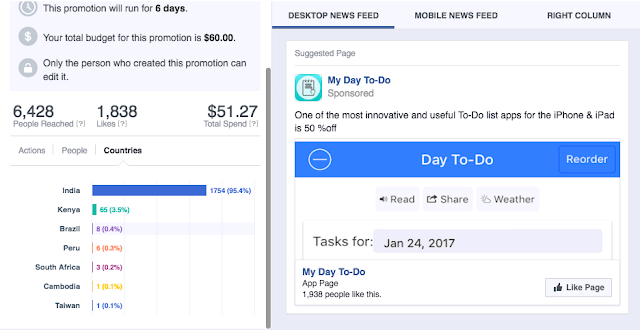 Final Summary – what I think happened

The number of page likes combined with the app downloads not getting a boost during this time makes me think that the Facebook campaign was not effective for my business at this stage i.e. it didn’t help me generate any downloads/revenue or get more users. The fact that it was mostly teenagers between 13-17 combined with 95% of the likes coming from a country where a majority of the smartphone users use Android phones, makes me think that the page likes was just a case of either
Lastly, based on the messages that My Day To-Do received on it’s Facebook page, I am not sure if the people fully understood what the page is about. The name ‘My Day To-Do’ is somewhat catchy and people often think that it’s a to-do list within the Facebook messenger itself. Someone wrote, “hey how can I add this to my messenger so I can keep all the (pictures) I like from My Day”, someone actually typed out their entire day to-do list in a Facebook message sent to the page! and so on and so forth. I haven’t received any support based messages for the app and what’s more interesting is that the page has lost a lot more likes since the first Facebook campaign ended. When the first campaign ended, the page had 2026 likes, right now it’s at 1938 likes. One of the teenagers from India had liked a few of my posts on the page and had also posted a picture of himself on the page’s wall, a few days later he had ‘unliked’ the page as well as deleted his post on the wall with a picture of himself.

Was it worth it?

The main question of it all, was the ad campaign worth it? hmm this is tricky, the answer is both yes and not, ok let me try to explain,

The main objective of my app at this stage is to generate more revenue, downloads, get more active  or even get an idea of what users think of this and this ad campaign did deliver on any of that.

This did spread the word for my app and now I know that the name My Day To-Do is indeed very catchy. This year, I plan to release the web version for the app and I think a page promotion such as this could potentially get more web users. The response from India only makes my desire to release an Android version of the app stronger. The Web version and the Android version of My Day To-Do are most certainly in the pipeline for this year, I hope I can make it happen.

Ok, to wrap things up, this was an interesting ad campaign and while it wasn’t beneficial to the current business goals, it does give me plenty to think about for the future. Following this ad campaign, I ran another more streamlined campaign for a different demographic that I thought may find My Day To-Do appealing. You can read about that in the next part of this post, here.

Finally, I am working on my app full-time right now so if you find my blog posts useful and want to support me you can

Any feedback on my apps or the way I write my post, would be great.

I am a big fan of Ubisoft games. Especially the Far Cry games. I have played 6 out of 8 of those games. There’s something about the big open-world that these games puts you in. Read more…

This post details the requirements for the game concept that we have in mind. Up next is the user story behind this app idea. User Story I want to be able to solve everyday mathematical Read more…